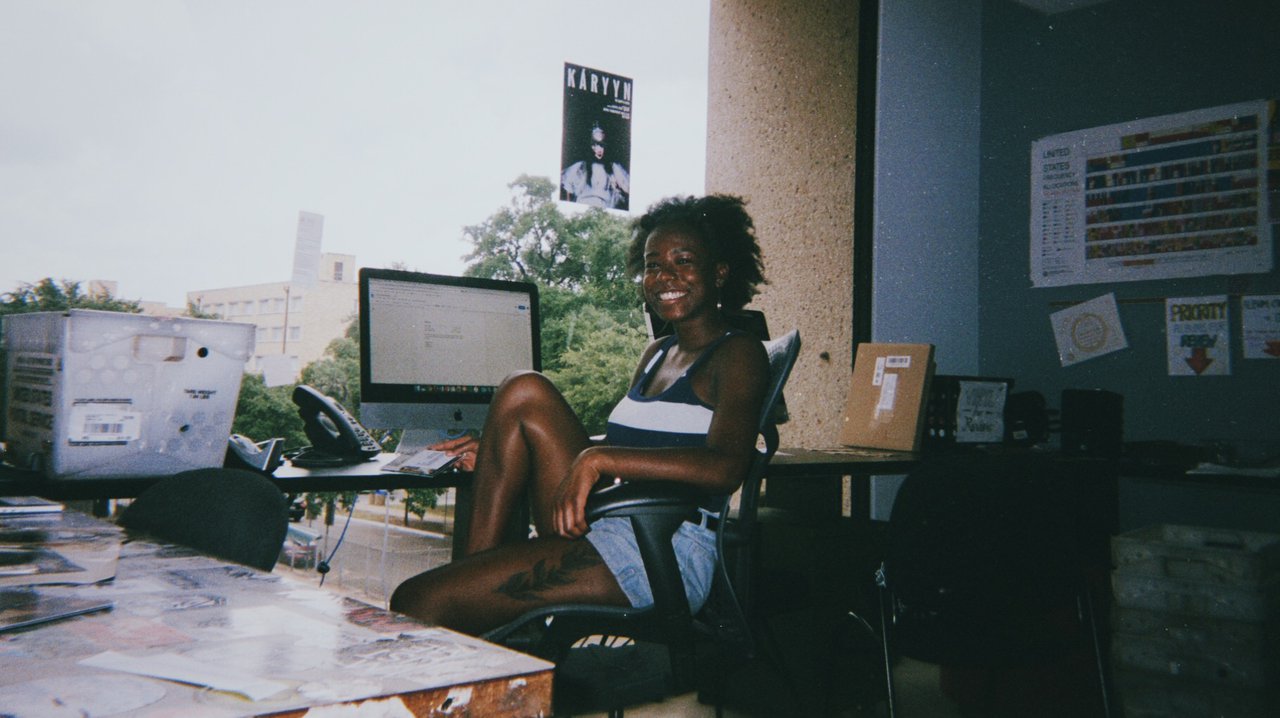 How did you first hear about or get involved with KVRX?

One of my friends in my FIG knew a girl in our UGS class who did KVRX and I thought it was the coolest thing ever!! We ate dinner at Jester one night and she told me how to join. We're still friends to this day. I came to rotation every single Friday because I completely misunderstood the volunteer requirements, but that's the main way I got involved, made friends, and eventually became a Music Director. I never registered for classes on Friday afternoons for the sole purpose of rotation.

Which shows have you had on KVRX?

What is your favorite KVRX memory?

Probably any time that I was out with KVRX DJs, going to shows downtown, and tearing it up. To be more specific, there are two that are very special to me. The first one is the KVRX house show from SXSW 2018. We had Omni (!!!) playing in someone's backyard! The mosh pit was very crazy...if you know you know. I was so excited to go to my first SX house show. My mom and I drove from Dallas to Austin that evening, so I literally exited i-35 and got dropped off straight at the show. Incredible.

The second is the final KVRX function for the 2019 seniors. The energy was amazing. Everyone was happy to be together and celebrating the fact that we were lucky enough to have been at KVRX during the same time these past few years. That was also the night that the ceremonial Station Manager torch was passed to me. I stayed up to watch the sun rise the next morning.

How has KVRX affected your interaction with music?

KVRX has opened my eyes to so much music that I'm not sure I would have ever found out about otherwise. I remember Deafheaven came to Austin right after I joined KVRX in 2017 and EVERYONE was talking about them but I had no idea who they were -- I didn't even listen to black metal! Although I was nervous and confused as to who this mysterious Deafheaven was, I went out on a limb to listen to them and they've become one of my favorite bands in college.

I've spent the past 4 years surrounded by people I respect and care about, and if it weren't for their opinions and experiences, how in the world would I have been exposed to such awesome artists, both from the underground and popular sphere? There is nowhere else I could've got the chance to spend my days reading reviews from CDs and vinyl that are no longer in print, that can't be found on the internet, etc. At KVRX, listening, finding, and appreciating music is a communal experience. I'm so thankful to have gone on this musical journey with my friends.

I've always tried to keep a running tally of the songs that helped make me who I am, and here they are. Some of them are old favorites while others are songs that I fell in love with in college or were significant to me during the many seasons of my life.

Mr. Brightside - The Killers: My favorite song of all time. When I hear Mr. Brightside, I feel invincible. For 3 and a half minutes, all is right with the world and I can do absolutely anything.

Helena - My Chemical Romance: Emo is my truth and MCR is the band that started it all. Yeah, The Black Parade is great, but Three Cheers for Sweet Revenge is the actual GOAT. I even taught myself some of the choreography from the Helena music video (lol).

Ceremony - New Order: The first time I heard this song was in Sofia Coppola’s Marie Antoinette (2006). If I were to make a film based on my life, I would definitely include Ceremony in it.

Next Level Charli - Charli XCX: This is for the moment when I learned to let go and love great pop (and dance like there’s no tomorrow). Listening to Charli XCX in that headspace is a transcendant experience. There’s nothing quite like it.

Got to be Real - Cheryl Lynn: This one’s for my mom. Flashback to her singing along to this ‘70s disco jam while we’re cleaning the house on Saturday mornings. She’s shown me so much great music and supports all of my eccentric ventures in life. I wouldn't be here without her.

1901 - Phoenix: This is the quintessential summer song. Phoenix’s particular brand of indie-pop carries a certain “french cool”, which I love. I think they’re the most important French rock band of the past 20 years. Remember was 1901 was inescapable? I do!

Such Great Heights - The Postal Service: I saw The Postal Service during their 2013 reunion tour. I was 16 and bought the tickets off of Tumblr (LOL) and ended up on the front row. I have no photos or videos from that evening, but it felt amazing to be a part of indie music history. Years later I ran into Ben Gibbard in Seattle — that was crazy.

Contractual Obligation - Into It. Over It.: This was the first and last song I played on KVRX. One time there was a terrible storm and the electricity and wifi went out, and this was the only album that would load on Spotify. That was the first time I critically listened to an album from start to finish with no distractions. Long live midwest emo.