Upon a call and my own self-interest into seeing what Sarah and the Sundays are about, I set myself out to their concert and it has left me with such amazement over their mixing of both bouncy and somber guitar while also interplaying it all with saddening lyrics. The environment itself was living in a whole other world. 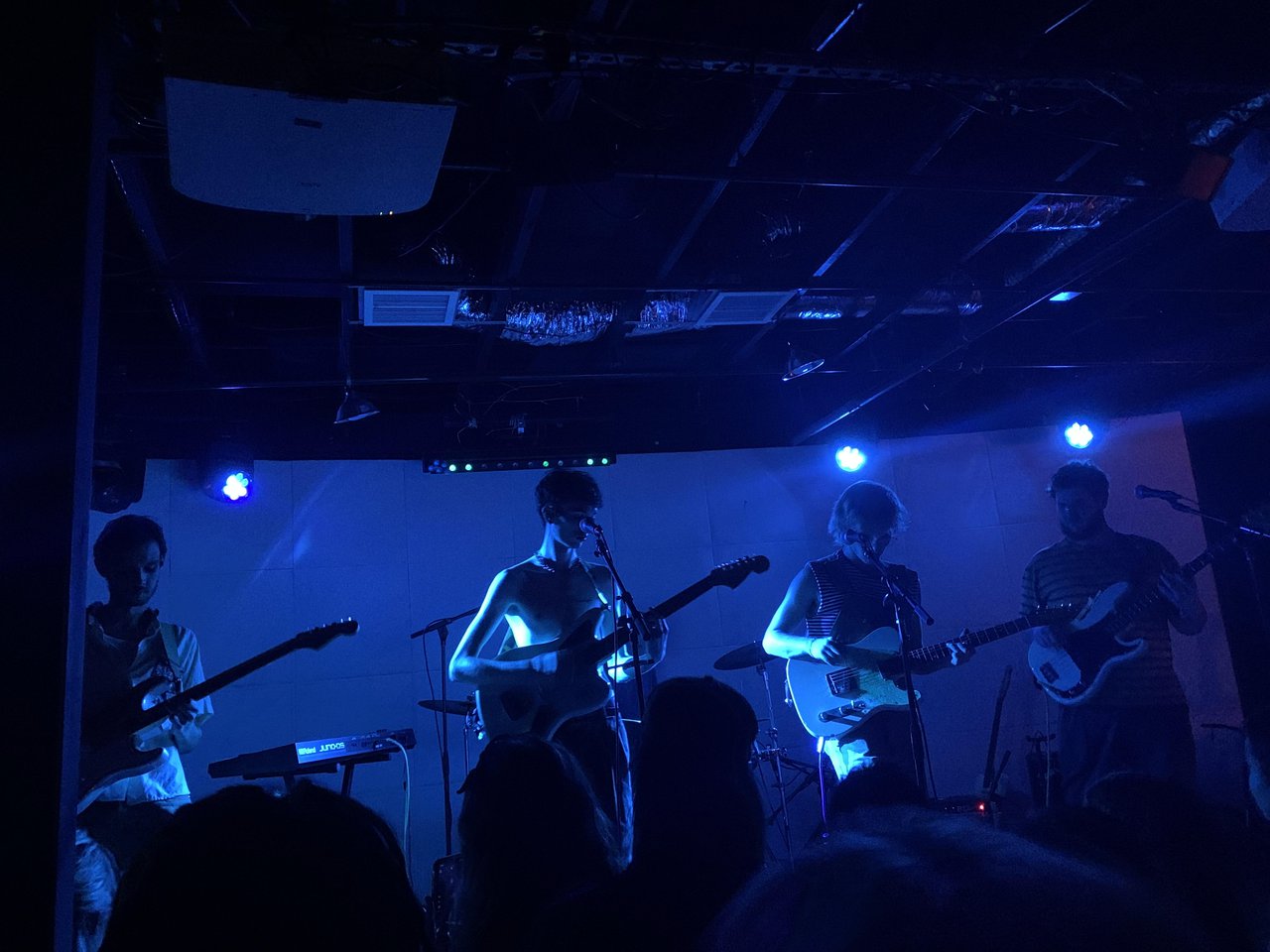 Unexpectedly, Sarah and the Sundays began with “For Harry”, a real somber instrumental with a mix of guitar, drums, and a cymbal. It makes me imagine two guys propped up on a roof, watching the sun go down as they crack open a couple of cold ones. What was more impressive was the mystery it instilled in me, as I asked myself “Who is Harry?”. Even more confusingly, why does this music start ramping up halfway into a perfect transition for the next song, "Coward"? My tension towards these questions is soon turned into excitement as I jam through the next songs.

“Coward” was so loud it was like I was beating my own chest with vibrations alone. With dim lights leading purple onto the band, all the guitarists are in the front row dishing out a bouncy beat, reminiscent of some classic 2010s singing around a campfire. The lyrics however are self-loathing as the lead singer calls himself a coward and feels like nothing will go right even when it initially might seem like it. I see it as Yorgensen talking about his own initial self-doubts about starting the band, a seemingly far-off fantasy while facing the realities of the real world as a fully functioning adult. However, the lyrics conclude that Yorgensen does not regret his old life behind as he “leave this house again and burn it to the ground (to the ground)”.

Then there is “I’m So Bored”, where through the lyrics alone, it is an obvious reference to everyone’s personal feelings about the pandemic. With dim lights transforming into a flashy red and orange with purple light shining on the main singer, there is a distinct expressive sadness that everyone in the crowd including me can personally relate to. With the initial pandemic creating growing isolation and depression amongst everyone, Yorgensen describes his own struggles through the pandemic while cooped up in the house, feeling a loss of motivation from doing nothing at all and even starting to see hallucinations. In a desperate call, his message reverberates through the whole audience to “see the light again.”

For “Vices”, the lead singer's true interactive nature is brought out, encouraging the crowd to “hear it for the kaypoh” and declaring the song itself to be a gift for us. After there is complete darkness, red and purple lights hit the crowd and band as the song’s pace picks up yet is embittered. “Vices” is a recollection of growing as a band, being the result of their first-ever visit to a studio. It's a song about their loss, growth, and change in general. I could feel the audio hitting my chest up to my throat, especially as all different colors flashed everywhere as the beat became impulsive and erratic that felt like an impassioned frustration from the band. As Yorgensen is “throwing away vices”, he even still admits he still has his own faults and is growing as a person as well. To me, this was incredibly inspirational, as Sarah and the Sundays bring us the message to be ambitious to your “bad ideas”, not necessarily for its hopeful success, but rather to leave the tediousness of life in order to appropriately grow.

"Masquerade" makes me think of coconuts with the blue and red lights spewing all over the band, and had a fruity tune to it yet still with sad lyrics, as if it was a tropical depression. Although hard to hear, the song starts with the quote “Because faith seems the way, doubt seems the dark night”, which sets the tone for the rest of the song. This song calls to always be yourself but instead of looking at the benefits, it looks at what happens if you lie to yourself. To follow a masquerade of yourself in order to impress others only leaves you as a person empty, making me think of its serious implications in our everyday lives while still headbanging to the beat.

Yorgensen talks about an interesting inspiration for the beginning verse of the next song “You Might Not See Me Again”. When he was in the shower, he forgot to open the window to let the hot air out from the bathroom fan. With an all-purple tint to both crowd and musicians, Yorgensen recounts not wanting to be there anymore in that environment. Whether “environment” means a breakup, the world, or just being in the shower, this song goes hard.

Before the next upcoming song “Veneer” is played, there is tons of interaction between the crowd and the lead singer. As Yorgensen finally introduces himself and his crew, a blue soft light settles onto the now jam-packed crowd to the point of constant skin-to-skin contact. The word Veneer itself is a thin sheet of material, which perfectly describes the song itself and the feelings of the character in the singer’s story, as he feels like he is losing his thin form of self, and as a result, losing interest in their partner as they can’t keep up with the lies. It makes me think of the self-humiliation some guys feel when they mess up trying to impress a girl, leading to being unsure how the girl feels over it and being filled with doubt, as he is “only a kid”.

As Yorgensen says, the super upbeat “Miss Mary” is simply about quitting weed. The music is almost angry, with purple and green-themed lights flashing everywhere. As he reflects on how weed killed his life and still tries to call to him, he declares he is now back in “control again” and making progress step by step.

As Yorgenson said to the audience, “Time Well Wasted” was a pretty personal song for him. As the somber and slow beat hits us, the blue-purplish lights on the band's heads look almost ghostly in the figure. I feel like a lot of us can relate to this song and it hit my soul in that sense, where the song makes me imagine seeing gradually over time your partner visibly becoming less and less interested in you and as a result led to feelings of inferiority. I imagine a scene of rain, but even with an umbrella, the rain is still hitting him, as it's “lonely as hell” for him. On a lighter note, Yorgenson does recall a funny story to the crowd that Declan Chill, the bassist, got stung by a wasp about two hours ago, helping to lighten the mood.

“Are You Really Gonna Show Up Tonight” however, felt so much like a fight song in a counter to “Time Well Wasted”. It's this classic that gets you jumping up and down to that repetitive drum beat and it's so great in that way of having that balance of chill guitar with shady lyrics.

“Stick Around” got a switch to an acoustic guitar and as if he was venting his frustrations while still letting us groove to it. Probably the best part about this was after some crowd chanting, Liam Yorgenson would ultimately relent and take his shirt off, getting cheers all around and amping up the hype for the last couple of songs left in the album.

“Take Your Time” was amazing in its unique approach in its lyrics, and whenever it was on its verses it felt like the singer was on a mic singing in the back and then all of a sudden transition to singing to us directly in the chorus. The coolest part was 100% those occasional guitar solos, and this almost crystal-like sound in the background just overall gave it a feeling of daydreaming goodness.

“Pulling Teeth” felt like I was stepping lightly in water, which caused ripples everywhere as a result of the guitar strings. The slowest one out of the bunch, the crowd cheered whenever the singers gave their background vocals. Even in an almost sentimental and nostalgic song, everyone was smiling at the end. With flashing pink and blue everywhere from the lights, everyone started screaming with excitement when during Yorgensons hardcore guitar solo, he got off the stage and played right in the crowd. Truly amazing stuff.

“The Living End”, as Yorgenson would declare, was his “favorite” out of the whole album. As everyone except the lead singer put up their instruments, Yorgenson simply just played the rest of his energy out, eventually getting the rest of the band to sing together with him and by the end everyone with me included was hollering for them to play “one more”.

Of course, Yorgenson would listen, and after grabbing a ukulele and past the mass cheering, he would play “The Woods” and, getting everyone to clap for this last song of the night, “Ruby Fields”. Literally an amazing performance. My favorite part was just how much the band seemed so attuned with the crowd, always talking to them back and forth between songs while also delivering just the most incredible performance I have ever seen, with excellent lightning around to reflect the moods portrayed.

Listen to Sarah and the Sundays latest album, The Living End, below: